We’ve just unveiled our new artwork by brothers Greg and Julian Goddard! We asked them a few questions about their art, read on… 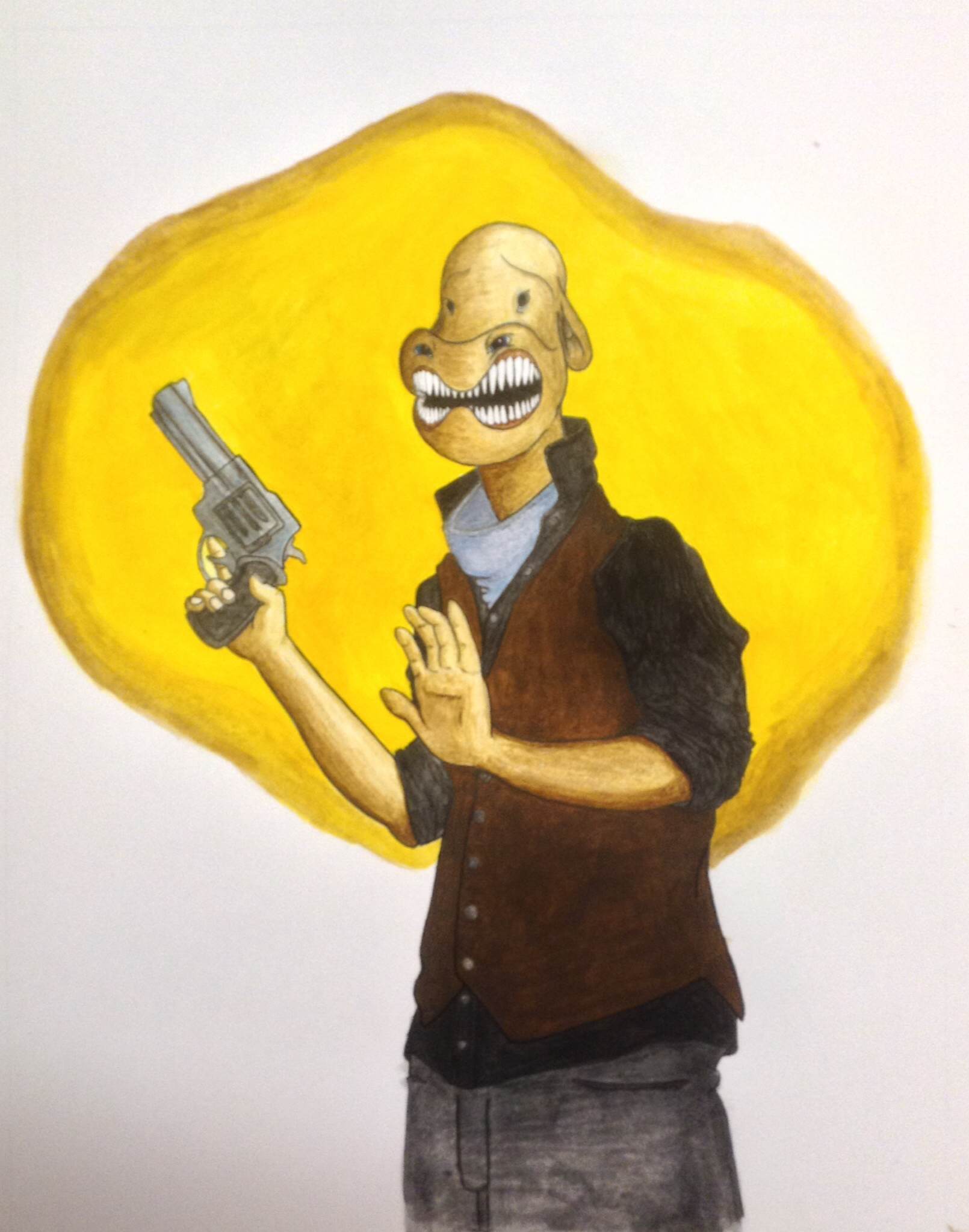 A local boy who loves imagining worlds and people and filling them out as drawings or sculptures. Spent a spell studying art and worked on a short NFB produced stop motion animation with a couple of knuckleheads from Montreal. Now designs and builds puppets for funzies. 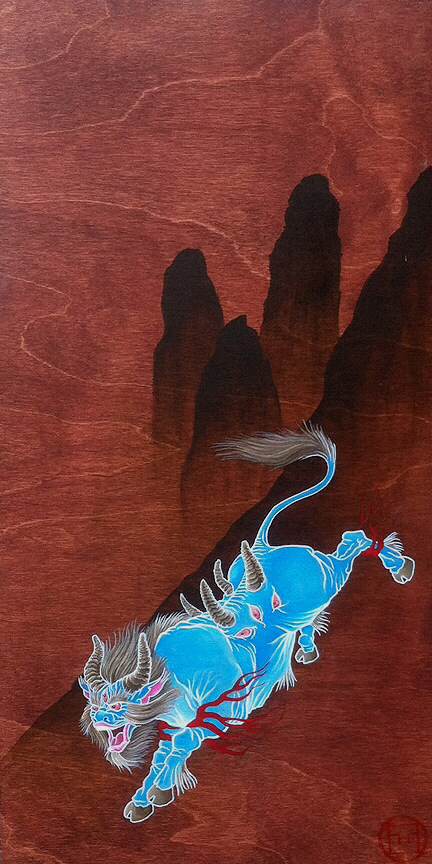 Toronto born artist.  Drawing since the age of 2½ years.  Two time dropout of the prestigious Ontario College of Art & Design (1999 & 2004, respectively).  Recipient of an honours BA specializing in Philosophy and majoring in Semiotics from U of T during the hiatus from OCAD.  Completed a 2½ year apprenticeship within the tattoo industry.  Member of the 2013 POWERHAUS collective. Accepted as of December 2013 as a member of the Canadian Alternative Arts Collective.  Specializing in painting, philosophy, semiotics and tattoos but with interests in mischief of all kinds.

What made you decide to show your work at the Beaver?

Greg: My ol’pal Joyce Lau was looking for possible candidates and asked if we’d be interested. She’s an awesome friend and a super talented artist in her own right  and when someone like her gives you an opportunity like this your only answer is you betcha!  As a venue the Beaver provides significant foot traffic outside the gallery system while being one of the best bars on the block. So who’d pass on that?

Julian: My brother, Greg Goddard, informed me that Joyce Lau approached him about doing a show of our work together.  It offered me the opportunity to not only show my work alongside his, which I have wanted to do for some time, but also to show outside of the gallery environment, which I think is important for art.

Can you tell me about your process?

Greg: A lot of my work comes from doodles and an active (overactive?) imagination. Some sort of story will be kicking around my noggin while drawing and I’ll end up with a bunch of characters. I’ll play around with them a while until i like what i see. If I really like them they’ll get some story ideas writen out. And if I really really like them I’ll take a crack at sculpting them.

Julian: It begins with a theme or subject matter to which I want to make a contribution or inspires me.  From there it is tireless research, ceaseless sketches and multiple versions until an initial line drawing has materialized.  This had been my process for a long, long time prior to working in the tattoo industry.  In the tattoo industry, all this work goes in ahead of time because you have one chance to get it right and it is on someone well after they are dead and in the ground.  I feel this is equally important in art; my sketches are prolific but outside of trial techniques in art production, an artwork is displayed as an end and not process.

What artists have influenced you in your work?

Greg: Way too many to count, much less mention. Comics, old world masters, old-school Czech stop-motion animation… listing specific individuals would take forever and pinpointing a select few would be like trying to tell you about a painting over the phone but focusing on the green hues in the upper left corner.
Julian: I am influenced by so many artists from so many different disciplines and with the immediacy of social media sharing there are some that I am only familiar with the works and not the names of the artists.  I think mediums more than particular artists have an impact on my work; my early exposure to the world of graphic novels and comic books, childhood fairy tales, myths and legends, Japanese woodblock prints and my love for tattoos and tattoo culture.  There is a running theme of illustration and design which can be seen in my work.

Are there any other Toronto artists you’re dying to work with? /  Who you admire?

Greg: As I’ve always like collaborating with others, maybe even more than working on something alone, I would say I’m pretty open to the idea. Producing some illustrations or a comic with my brother has been something I’ve wanted to do for a while as I definitely admire his work. Also, Joyce Lau’s work is amazing and I’m pretty keen on Team Macho as a team and as individual artists.

Julian: I would like to do some collaborative works with my brother, I think the narratives he devises that give birth to his characters and images is something I wish came more naturally to myself.  I would love to work in collaboration with Clint McDowell, who not only taught me how to tattoo but has been working on my body suit, as well as Luke Colavecchia, who tattooed a severed geisha head on my left foot.  I have been working with them for about 4 years or so and the inspiration and camaraderie is abundant.

Do you and your brother show together often?

Greg: Most of my illustrative work ends up being used as preparation for sculpting. So in some ways the three-dimensional work takes precedence over the two-dimensional work – making finished images sort of far and between. Sculpting has definitely helped me to better understand shape and form which in turn has improved my illustration process. Nothing groundbreaking, but it is definitely beneficial to work in both mediums as they enrich and inform each other through their differences in approach.
Julian: The medium of skin is like no other; equally as difficult as it is rewarding.  The individual particularities of each client and each of their different body parts can never be predicted as every inch of skin can be different on the same client.  The requirement of being absolutely present in the now, the level of focus for every line, shadow or colour, is akin to work as meditation.  It is something I find I am bringing more and more to my work in more traditional art forms.

What differences do you find there are in showing your work at cafés and bars vs. gallery spaces?

Julian: It is important for art to not be confined solely to galleries and museums.  There are issues surrounding the exposure art receives when it is behind the doors of a gallery or museum. There is a prevailing perception that art can be inaccessible or intimidating to the public and I think by showing in cafés and bars does work towards addressing this. There are a lot of preconceived ideas regarding art, what it is, who understands it, where it should be shown. I think that there should be as many venues as there are artists and styles.

Any final words?
Greg: …
Julian: Thank you for the opportunity to show with my brother as well as in your establishment.

This entry was posted in Uncategorized on January 29, 2014 by thebeaver.