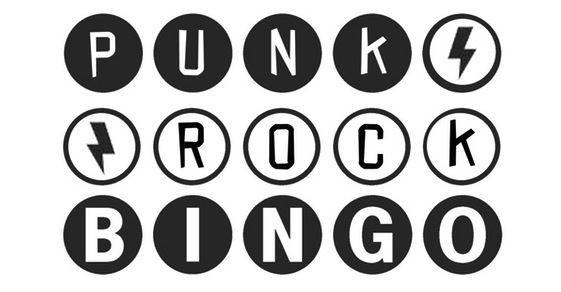 On the last Wednesday of each month (and the 18th of December because of Christmas) we are featuring an awesome night called Punk Rock Bingo hosted by Daddy-O and drag queen Jenna Syde. The proceeds go to charity and after the bingo (which begins at 9pm) there’s a punk party DJed by Triple-X. We talked to Daddy-O about how he managed to get punk and bingo in a room together.

So, punk rock, bingo… what do these two things have in common?

Both are still alive and kicking. Some may say punk rock is dead, or bingo is
for the dead, but that’s dead wrong. Our balls are dropping fast and furious,
just like the music you’ll be hearing.

How did you decide to make an event out of it?

I wanted do an event where people could head out earlier in the evening for a
fun night of socializing and listening to tunes they might not hear at other
bars. Also, we raise money for various charities each month, and have some
amazing prizes to give away, so it’s an all around feel good night. Then once
bingo ends we keep things going late with a punk infused dance party.

Do you think bingo is making a comeback at all or are you starting a new
trend?

Bingo has never really gone away, however we are kicking the closet doors wide
open by appealing to a motley crew of dabbers!

Describe what the crowd is like at ‘Punk Rock Bingo’?

Intense! These folks are serious about bingo. Things can get nasty, and a lot of
curse words yelled out by the losers, which there are many of. Also, the winners
don’t make any qualm about rubbing their prizes in the face of the
losers…literally. Here’s an insider tip…don’t forget your lucky trinkets.

What kind of prizes do you give away?

We have a shit load of fun things to giveaway, including t-shirts, piercing and
tattoo certificates, books, CD’s, dinner vouchers, and some Spearhead and Kensington Breweries beer! All our great sponsors can be found on our Facebook Page.

How sober do you have to be to win at bingo?

Umm, I don’t know as most everyone who plays shows up hammered…and if they don’t
they usually end up that way with our cheap-ass drink specials ($3.50 domestic
bottles), and our O-69 whiskey shots available every time we call our favourite
number.

I understand bingo is a big thing in the suburbs of Toronto. Do you think any
confused Ford Nationers will stop by?

Never mind his Nationers, we’ve invited his whole dysfunctional family to come
play with our balls!

What is the best thing about ‘Punk Rock Bingo’ at the Beaver?

Besides the O-69 whiskey shots? I’d have to say the sporadic drunken stupors of
Toronto’s one and only punk rock drag queen, Jenna Syde.

Punk Rock Bingo happens the last Wednesday of every month, with the exception of
December where we’ll be throwing a holiday themed soiree for all our peeps and
freaks on the 18th of the month. Bingo is played 9pm to 11pm and there’s never
a cover, only donations for the cards. Hosted by Daddy-O and Jenna Syde, and
stick around after bingo for tunes you shouldn’t be listening to, courtesy of
DJ Triple-X.

This entry was posted in Uncategorized on November 27, 2013 by thebeaver.